Diversification snaps Klein Karoo out of a rut

Diversification snaps Klein Karoo out of a rut 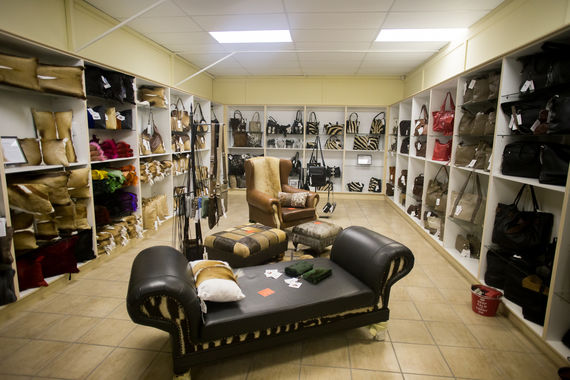 An investment in machinery to process crocodile hides into sought-after leather used in fashion accessories has given a new lease of life to Klein Karoo International Leather.

“Our facilities have suffered a lot over the years due to lack of investment. So, infrastructure was not in a good condition but the Productivity Improvement Programme (PIP) has put our infrastructure in a state where we can again compete internationally,” says company MD, Charl du Plessis.

The business is a subsidiary of Klein Karoo International, a co-operative owned by farmers from the region who specialise mainly in produce from ostriches – including leather and meat – as well as other agricultural products.

Du Plessis says the diversification into tanning crocodile hide was a natural extension from its ostrich leather heritage given the similarity in markets as a raw material for luxury leather goods. The new machinery can also be used for processing of ostrich hides.

“The PIP gave us the opportunity to equip our facilities with crocodile-specific equipment and to enter the commercial space for crocodile leather,” he says. “The result is that now we are the biggest tanner of exotic crocodile leather in South Africa. We are also becoming a force to be reckoned with internationally and are seeing more and more that our crocodile products are establishing themselves quite well.”

This emphasises the significance of the support that has been extended to the textiles industry through CTCP since it was introduced in 2010.

An important outcome from the support that Klein Karoo International received is its new-found ability to add value through local beneficiation. Du Plessis says that the value of the raw hide practically doubles once it has been tanned and finished.

“It requires a high level of skill, so basically you are employing people with high skills levels who are very well remunerated. When you look at the core benefits of the programme, the creating of employment opportunities has been the major impact for us.”

One of the reasons that the company places such a high priority on employment is that jobs are scarce in its rural environment. The nearly 220 staff therefore support up to about 12 people each, with up to 30 new jobs having been created from the expansion into crocodile hide processing.

“On the ostrich side, I would say that we’ve been able to retain the skills we have because we are able to process a product that is probably on par with the best in the world. If we had not been part of the PIP scheme we would have probably lost 25% of the jobs because our product was not up to standard anymore.”

Interestingly, the challenge for Klein Karoo International has been less about needing to overcome competition of cheap imports from China than it has been about entering established, highly competitive export markets.

Its main competition is in Italy, which has well-established exotic leather processors numbering up to about 250 tanneries. Klein Karoo, however, has been able to successfully identify a market in Japan and to supply high-end brands like Luis Vuitton and Hermes.

Du Plessis says that one of its major advantages is that the processing of exotic leather requires a high level of skill.

“We have some third-generation people in our tannery with a lot of knowledge and intellectual capital. It’s not so easy to duplicate. What’s nice for us is that because its fashion it requires a high element of creativity.”

For this reason, the company has prioritised training of staff and incentive schemes that reward them for developing new ideas that could appeal to global fashion tastes.