From import dependent to export kings

From import dependent to export kings 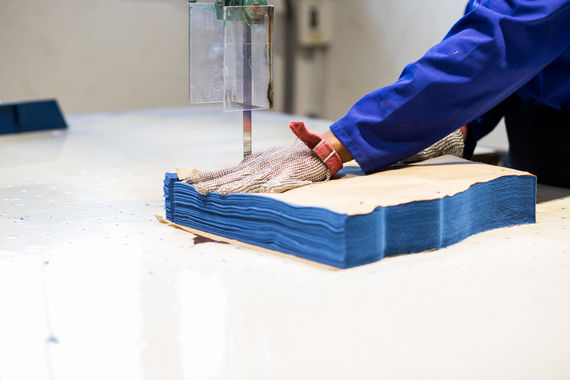 The success of dti’s CTCP inventive programme to aid the clothing and textile industry in its hour of greatest need is demonstrated in the turnaround that Durban manufacturer Ninian & Lester has managed to achieve.

From being at the mercy of imports, the company today almost exclusively uses only locally-produced fabric, has successfully broken into the export market and has added nearly 100 new jobs per year since 2013.

This is a phenomenal change in fortunes for a group that started in 1936 as a manufacturer of ladies’ underwear. One of its staple lines since then has been as the local holder of the Jockey underwear franchise, while it has also since expanded into knitted fabrics.

Company CEO Adriaan Verhagen says this is a far cry from 2002 when he joined the company and it seemed that the textiles industry was on it’s knees. Such was the impact on the business that it delisted from the JSE as its market was eaten up by cheap imports.

It was thanks to the Competitiveness Improvement Programme (CIP) and the Production Incentive Programme (PIP), however, that the company has been able to significantly improve its competitiveness.

Such have been the improvements that Ninian & Lester has been able to replace some garments it used to import from China with local production, while expanding its exports into Europe from 2014. “In order to complete that journey, you ought to have fundamentally changed the way you run your plant because we are competing directly with the Chinese manufacturer,” Verhagen says. “PIP really managed to accelerate our programme of ensuring that we remained competitive. We upgraded our equipment, processes and information systems to be able to run a business that manufacturers about 16 million units per annum, and today we employ nearly 1 500 people directly or indirectly in the manufacturing of the garments.”

Bruce Maree, MD of the Jockey Division says PIP allowed the company to invest in modern machinery that has improved productivity and quality.

In order to fulfil its ambition of continuous improvement, the new machinery and growing export base has meant that the company also invest in staff training and upskilling.

Verhagen says this has achieved mainly through a training school that was started in 2008 with the support provided under PIP.

Apart from a learnerships programme that forms part of this initiative, the company also implemented an Adult Basic Education & Training programme, with about 200 students participating in this between 2008 and 2011.

The learnerships programme has enabled Ninian & Lester to provide new skills to employees. The ability to provide workers with multiple skills was central to the company increasing productivity and versatility, which are crucial aspects to remaining competitive. “It is important for a business that is expanding and growing, to have educated staff that you are able to move between different operations as well as develop into supervisors and management in future,” Verhagen says. “Without the support from the IDC in both the people development and the machinery, the ability to break into this lucrative international market would have been far more difficult to achieve. This had led to growth all round, amongst staff, in the quality of the products and the company as a whole.” He concludes that the PIP and CIP programmes have undoubtedly help to stabilise the industry that will now allow it grow. “There is a great team at dti and the IDC, and I think they understand the problems very well. I think getting cohesion within the industry that possibly is the challenge but it’s a very diverse industry with a lot of different stakeholders with a lot of different agendas so it’s not easy. But I think there is a real opportunity now for the industry to grow back to what it was.”