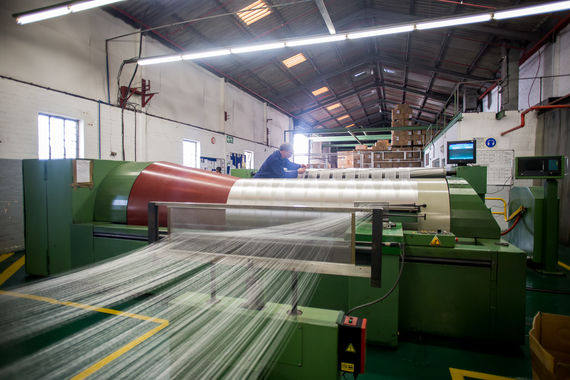 Dave Lorimar is able to look back over the past seven or so years and report strong growth in his business. Phenomenal growth, in fact, that has seen his premium knitted and woven fabric manufacturing business grow annual revenue to R200 million from R80 million in 2010.

This growth is all the more incredible given the trouble that the local textile industry has suffered since the mid-1990s in the face of cheap imports from China.

For Lorimar, MD of Cape Town-based DesLeeMattex, the story of the company’s turnaround is not captured in a single intervention, or even in the CTCP financial incentives the company accessed to improve its competitiveness.

“This is part and parcel of the impact that PIP has had and the reason why I say there’s not a direct correlation, because you can’t single out any one thing. It has been an enabler,” he says of the funding the company has received from the Productivity Improvement Programme (PIP) and Competitiveness Improvement Programme (CIP).

This is an important differentiation to make as it is easy to become reliant on money from these programmes that have allowed textile companies to invest in new machinery. But without a bigger picture and a broader appreciation of what is required to remain competitive, the industry could easily slip back into stagnation.

He credits the CTFLGP cluster programme for sparking a different approach to operating and growing the business. DesLeeMattex participated in the polyprop cluster, which Lorimar says led to a complete mind-set change.

This was achieved by starting to measure the company against global benchmarks and drawing on experts and technical partners that have given him and his team the confidence that they can compete internationally.

“That’s has been our success in taking best practices and learning how to actually implement them in-house,” he says. “So I think the style of management changed in terms of going from a managing function to a leadership function. And really taking people to the level of increasing engagement, increasing their awareness of the performance of the company and making sure they’re benchmarking and measuring their performances through KPIs and standards.”

While this approach has been crucial to the business managing its turnaround, it is also partly due to it expanding its offering into higher value knitted materials.

Lorimar explains that the company expanded into this segment of the market in 2010 when it accessed funding from the CTFLGP programmes to buy more knitting machines.

“Obviously we have invested more in terms of the knitting side, but the woven production contribution has stayed consistent. So, we haven’t lost any of that market-share, but the knitting has added extra revenue on top of that.”

The CIP funding, in turn, has been used to improve other aspects of the business, such as the benchmarking, and strengthening its reach into markets including Kenya, Tanzania, and Zambia.

DesLeeMattex has also invested heavily in its people to increase their skills and competencies. Part of this programme included setting up a SETA-approved learnership programme that has attracted unemployed youth for training.

“We’ve been able to expose them to manufacturing processes and also been able to get them a qualification at the end of the process, which is a nationally-recognised qualification,” Lorimar says. “As we have grown we’ve able to appoint some the learners as employees, so we were able to pick qualified individuals.

“In fact, when I talk to other factories around the world that are in the same business, they wish they had something like this.”

With the company having grown its employee numbers over the years to 124 people and the possibility of adding more soon, this strategy is sure to have long-term benefits.